According to the Washington Times the Obama Administration has a history of under estimating and downplaying the strength of the Islamic States.

We had no doubt that whatever Obama is doing is not in America’s best interest whether domestic or foreign affairs.  President Obama is so blatant in his disgust for America.

Bill Clinton while President frittered away our military and our highest, most precious secrets.  Within his administration the prevalent thought was “it wasn’t right for us to be the only superpower” the Madeline Albright, Strobe Talbott foreign policy and the jaded education and brainwashing of a young Barack Obama.  Obama entered into office as a proxy for the same cabal which ran the Clintons. 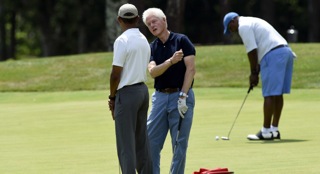 Fresh news of the hacking of The Clinton Foundation and revelation of NSA tools that takeover firewalls, it is plain to see a revolt against the controlling takeover of American life. Those who can hide their tracks have exploited the dimwits who don’t care about America and only have plans for dynasty and enrichment with its very nature in evil.  Bill Clinton in 1996 for political reasons, ran down the State of Arkansas’ reputation with his vivid recollections of black church burnings in Arkansas.  There were none.  Vivid Childhood Memories of a Clinton Fabrication

St. Louis and Kansas City have been told in almost every election since 1996 that black churches are going to burn if Republicans are elected.  It’s not hard to see how they have had to galvanize the black people around a kumquat like Barack.  It was the only way to keep the blacks on the reservation which is quite apparent because they’re having trouble keeping their black vote as Trump reaches out with a message of sane development.  Safety, education and jobs.  We now look and see that after the Clintons milked the Chinese and the Indonesian ethnic Chinese and our native American tribes, they have turned to the flush: Arab Kingdoms.  Satrap Incorporated.

Turkey, a Barack ally and inspiration for the mosque in Lanham, MD has overnight created a political gulag.  Barack Obama has started to empty out our prisons (we shouldn’t be just concerned with Gitmo) and so you have the birds of a feather.

2 thoughts on “Enough of the Radical 60’s Sculling Crew!”