The best Christmas gift for all Americans and those wishing to become Americans, legally, is a President-Elect Donald J. Trump.  Already a presidential figure in International politics.

Many are aware that Mexicans entering the United States are allowed by Mexico to maintain their voting rights at home even if they register to vote under the Motor-voter Act in the United States.  The Mexican government is very aware of this attempt at placing the American voter over the barrel by influencing our elections.

Trump went to Mexico and they ate out of his hand.  One thing;  the influence the Government of Mexico sought to have with these dual voters seems to have vanished.  Mr. Trump represents “mucho trabajo.”

Now we need to get around to Christmas.  This Christmas will be the 110 birthday of the Grinch who stole Christmas: Clark Clifford.  In his very long life, Clifford served presidents, parties, The United States Navy and many-storied clients…for he was a lawyer.

Prior to Richard Nixon taking office in 1968, Clark Clifford was Robert McNamara’s replacement as Secretary of Defense.  Upon leaving government, he became senior partner in Clifford and Warnke.  In 1981 Clifford became the Chairman of BCCI (a client of Clifford and Warnke.)

A sideline to BCCI, is Bert Lance, White House Budget Director under Jimmy Carter.  Lance had an attorney, Clark Clifford.  Clifford had a young protegé, Robert Altman.  Lance suggested that both these men become legal advisors to Agha Hasan Abedi with respect to BCCI’s prospective U.S. Operations.  Clark M. Clifford was in on the ground floor.  Abedi had worked with the National Bank of Georgia; Lance was a shareholder.  A certain Ghaith Pharaon, was charged in acquiring the bank while acting as a front man for BCCI.

According to Lance’s testimony,  Clifford and Altman were closely involved in BCCI’s acquisition, which from the beginning, was hidden.  (So the institution could hide much more?)

Testimony of Clifford, Altman and Lance – each admitted involvement in Lance’s 1977 decision to participate in Financial General Bankshares hostile takeover.  Of course their accounts differ slightly as to whom the involved parties were above them.   Who they were representing?

In Mr. Abedi’s defense, which seems repugnant, Exhibit 1;  (30 January 1978 cable) from Abdus Sami, one of Abedi’s top aides, outlined how Clark Clifford was involved from the start of BCCI’s acquisition strategy to move into U.S. Banking.   Also in the cable, Lance was referred to as “our friend,”  recommended Clifford as chief counsel.  “Accordingly I met Mr. Clark Clifford and explained to him our strategy and goals.  He was happy to hear the details and blessed the acquisition.”  Also in the cable: “we have to be careful that our name does not appear as financier to most of them for this acquisition.”

When you look at legal stuff like this, O.J. is chump change.  Clark Clifford is the mold lawyers use today against us from their perch in the Federal Government.

Clifford testified that he first learned of BCCI when Lance introduced Mr. Abedi in December 1977.  The fact is, Clifford and Altman were already representing Lance with NBG sale to Ghaith Pharaon.  This transfer was handled and negotiated fully by Agha Hasan Abedi.

BCCI later sparked much controversy in Washington D.C. between U.S. Intelligence officials and a former CIA head, foreign intelligence, covert operations individuals, (outside the US and possibly within our country.)  In addition to all of this, it was uncovered that CIA director William Casey and BCCI’s Abedi had extensive meetings.  Right here you can tie the CIA drug running operation that sprung up from the people who ran your stock market crash, The New Deal and the thievery that that entailed and sent their sons to war to become “intelligence agents”  who subverted the government in a military industrial takeover, bankrolling themselves – even upon cashing out they left a five billion dollar hole with BCCI (exactly like Nugan Hand, a major CIA front.) 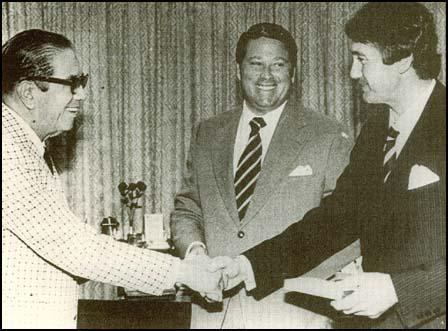 Mr. Helliwell was a lawyer and during WWII transferred from the United States Army to Bill Donovan’s Office of Stategic Serivces “OSS.”  From 1943 to 1945 he was the head of The Secret Intelligence Branch of the OSS in Europe.  He was replaced in this post by William Casey.  Helliwell had been active in China with a slew of the boys and in 1947 he joined the newly formed Central Intelligence Agency.  Helliwell was sent to China in 1950 by Frank Wisner after Mao Zedong took power.

Helliwell was the conduit for money and logistical supply for Chiang Kai-Shek to prepare for an invasion of Red China at a future date.  CIA created front companies: Civil Air Transport, a Taiwan based airline and a shipping company in Bangkok Thailand known as Sea Supply Corporation.  Helliwell’s plan was to use these front companies to support Chiang’s Nationalist Army.  Sea Supply imported large amount of arms while Civil Air Transport ferried the arms to Chinese troops in Burma.  The return flights from Burma to Taiwan, Bangkok and Saigon, were actually laiden with opium tar to be processed into drugs.  After the French lost Vietnam, Helliwell changed focus from Chang Kai-Shek.

To stop the spread of communism across Southeast Asia,  he made agreements with private armies controlled by drug lords.  William Corson, a Marine Corps Officer,  had stated that portable heroin processing facilities were brought in and turned over to the men in the field so that the profits from drugs would run unofficial, covert operations.   After the assassination of President Kennedy, the CIA sent Helliwell to the Bahamas where he set up offshore banks:  Mercantile Bank and Trust Company, Castle Bank and Trust Company and a Galveston Texas-based entity, American Bankers Insurance Company.  He also created in the Cayman Islands: Intercontinental Holding Company. (Barry Seal from Mena Arkansas is connected at this point.)

In the above linked story there’s a video of Australian 60 Minutes.  Their camera team came upon who they believed was Michael Jon Hand.  The reporter was saying something to the effect that Hand didn’t expect this day to ever come. Watch the video and then watch it again and keep your eye at the seven second mark when Mr. Hand steps aside; the man behind him at the door should be your focus all the way through the video.  Keep looking for him, he has his hands in his pockets.  Could he possibly have two 5.7 FNH pistols?  I would think so.  I say if he is not protecting the bank bag in Michael’s hand, he’s looking out for the henchmen that might be employed by the investors who lost $50 Million from the collapse of Nugan Hand Bank in early 1980.

When Frank Nugan was found dead in his Mercedes-Benz of a gunshot wound, beside his body was a Bible and a piece of paper with the names of Bob Wilson, Senior Member of House Armed Services Committee and Bill Colby.

Wilson rarely faced opposition in conservative San Diego; re-elected 13 times, a staunch anti-communist, quoting himself in his book “Confessions of Kinetic Congressman”:    ” President Harry Truman and morally bankrupt administration was riddled from within by graft and grand larceny.  The Trumanites had had their  day….it was time to turn the rascals out, to make a clean sweep and reinstate Christian principles of morality on a national level.” (Clark Clifford was a Trumanite.)

Bill Colby was the 10th Director of Central Intelligence.  His testimony before Congress precipitated Stansfield Turner’s mass firings at the agency.  Colby, in his retirement, began a career with Strategic Investment Newsletter which had hired three handwriting experts who independently came to the same conclusion.

BCCI investigated by the CIA (the chicken coops keeper of the key, the fox?)  A masterful ballet performed in public and sold by the media.  This cover was perpetuated because there were many secrets to be kept in all of this. Intelligence.

These people involved have a blanket in state secrets.  Money laundering, drugs, arms trafficking,  and a briefcase full of cash goes a long way to get things done. (Especially by contractors with benefits who can turn a handy profit.)

For all the dirt that people want to drag up on Ronald Reagan, he handed out Bibles to the Troops and George Herbert Walker Bush swept them up as he sent the boys off, to “save” Kuwait.

Then came Clinton who gave America Wiccan Chaplains in the military.  Wiccan symbols in our cemeteries and a stain on our most hallowed ground.

One thought on ““People Have A Right To Know Who Owns Their Banks” N.Y. District Attorney Robert M. Morgenthau Manhattan, NY”